YOU DIDN’T TAKE WHAT JUMP? 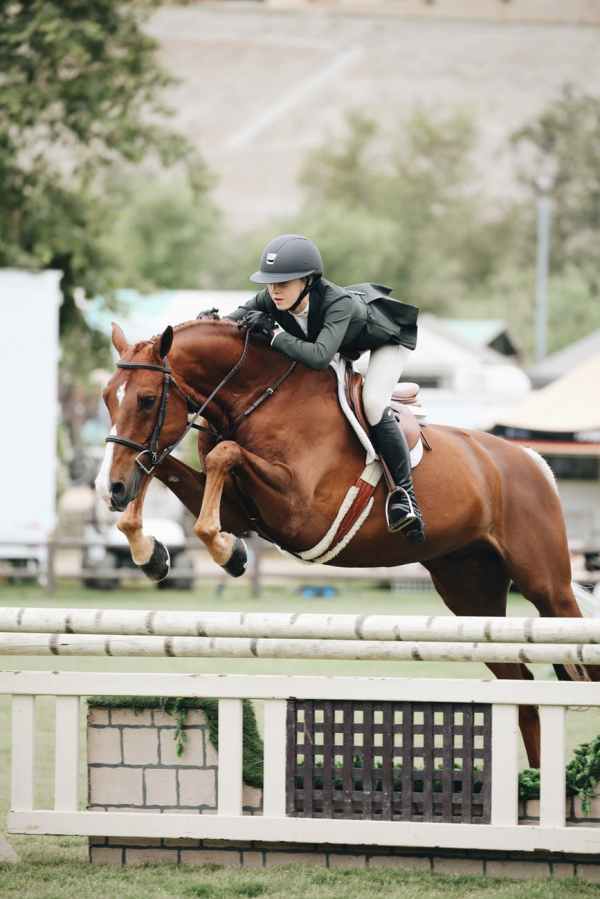 Photo by Laila Klinsmann on Pexels.com

Now that horse show season is upon us and in full force the calls are pouring in from clients literally at a show with a horse that is refusing jumps and oftentimes acting very spooky and wired.

This has become such a common occurrence over the years it’s almost like clockwork.  Many people will pick up the phone right away and call for help while others may exhaust every avenue known to them and finally call me for clarification and to have me communicate with their horse.  Either way it eventually works out.

This can be a very frustrating experience especially for younger riders but also the ones at the top of their game in competition.  The frustration often comes from the horse being perfectly fine expressing no signs of anxiety or physical discomfort.  One who has been absolutely fine at home and sometimes most of the way through the show.  Then all of the sudden here comes this behavior of refusing jumps or being jumpy.  For so many there is so much on the line and answers need to come fast and they need to be right on point.  This is true for the horse as well as the rider.

So, when the call comes in that out of the blue this horse has started refusing jumps and/or being spooky in the arena I immediately ask them to show me what is happening and to ascertain if this is physical or emotional.  You would not believe how straight forward they are.  Many times they will run me through their experience with images as well as words but most of the time it is a very small adjustment that needs to be done and they are fine as wine!

This should be helpful.  One time I had a trainer call me from a large competition in North Carolina and had literally just walked out of the arena to call me.  Everyone was totally confused and needed answers right then.  So, get this, the horse showed me an image of and told me of being lunged on a different and much deeper surface the day before the show.  The issue he was having was that this deep surface caused him to use muscles in his hamstrings that he had not worked like that.  When I mentioned this to his trainer, he said yes that because of weather they had to be lunged inside with deep  footing and it would have caused him to overuse those muscles.  The example he showed me was almost like a human going to the gym for the first time that year and all the muscles that haven’t been worked for awhile or maybe years for some of us.  So, don’t you know, they checked out the hamstrings on both sides.  Both were extremely tight.  He didn’t want to leave the ground because they hurt.  They worked on the hamstrings, got them loose and he was fine.

Another time it was a matter of getting new shoes right before as well as feeling rushed at the jump. Many times these horses have been ridden by others and the style is different or it may be that they have several different riders and this can be confusing.  But the one constant that comes up in most cases is that the rider needs to make a small adjustment.  Oftentimes it is that the saddle needs to be moved up or back by only an inch or two and it makes a tremendous difference.  Other times it is the way the rider is sitting up too far or back to far by even an inch or two and it makes a hugh difference to them.  The higher the competition level of the horse the smaller the adjustment will be that makes them off.  If the saddle happens to be up or back even by a small amount it causes the rider to sit up or back on them and even the smallest amount can make a difference.  So basically it can simply be weight distribution and we may never know it because we aren’t thinking an inch or so makes all that much difference.

Of course a nervous rider will cause the refusals as well as a rider who pushes even when they can tell the horse is hesitant.  Many horses have just simply been over shown or have lost their confidence because of being pushed when not comfortable. The most important thing you want is a cool, calm and collected horse going into competition but the higher the stakes the more pressure on them.

I have to say this to you at this point understanding is key here.  The most productive straight forward way to address this is to speak with them directly!  It’s that simple.  Who better to tell you what exactly is going on and how to fix it than the one actually competing and doing the work.  There are so many different reasons for a  horse refusing jumps but you will only really know when it comes straight from their mouths.

So what are some of the reasons horses refuse jumps?

The last one on the list I believe is the most important other than physical pain because it is the norm for these horses to be belittled and get the brunt of so much anger, frustration and disappointment that their souls get broken.  They are just trying the best they can and it is only because something is going on with them either physically or emotionally that they are trying to tell us something by refusing.  This is part of their language to you.  Listen to it and try to find someone who can speak with them and work it out.

At times like this I see so many wonderful horses be sold. go to auctions where no one knows what happens to them or how they are treated,  or put out to pasture because they are not living up to their performance levels and all it really would have taken was an open conversation with them allowing them to speak and share their feelings and words.

Also one horse in the South that I worked with had been given shots just a day or so prior to being trailered to the show hours away in a location she had never been before.  I believe some of the shots had to do with ones necessary to travel there and be in the show.  Well, the horse had an allergic reaction to them and also had a respiratory problem at the show itself because of being allergic to certain things in that area of the country or the barn they were in.  So when asked to jump she wouldn’t which was extremely rare for her.  When I asked her she said she was not getting air.  Her windpipe seemed very restricted which wasn’t showing in labored breathing and she couldn’t jump well.  So she was having an allergic reaction which no one would have ever known.  But it was very sad because the young girl showing her had lots of people who had come to see her show and she was very frustrated and angry at this amazing horse.  That part of it broke my heart because I knew this horse to always give her all and more and never disappoint but this time she was struggling and without knowing people were very angry with her.

The most important thing I will say here is that “making” them do it and pushing them through it when they are uncomfortable too many times in my opinion makes things so much worse.  What better way to understand why they are refusing than to simply ask them.

This is a funny thing that I have to add here after many years of doing this.  I know from my experience when my own daughter showed and just being around so many high end horse shows what it costs financially to do this.  Not only the cost of these incredibly experienced warms bloods that are coming in, but the training, the transport, farriers, vets, clothing to say the least, tack, etc. can be ginormous!  Yet when there is an issue whether physical or behavioral that is really difficult for both the human and horse people will so often say “well I don’t know if I really want to spend the money for an Animal Communication session”. It blows my mind.  I completely understand if people either don’t believe in it or don’t have a comfort level with it, but these people are actually making a decision based on finances which is most likely the very least expensive thing they will do.

Giving any animal the gift of speech is the best gift you will ever give them except your love and care.  For so many it is the first time in their life they have ever been able to speak and not only express their feelings but share their history and backgrounds with us to help us better know and understand them.  This is true for any animal but I will say to you that when it comes to animals who are competitors and athletes they have to have their head in the game the same as a human athlete.  They have to be physically fit as well as emotionally prepared and mentally in good form.

So, the next time your horse refuses a jump, please don’t think they are just being stubborn or unwilling. Please don’t punish them or say mean things to them.  They feel the same as we do.  They grieve, they hurt, they feel and process negativity the same way we do.  Don’t bully – ask.  For what is it all about if we can’t connect with them and talk through each situation as it comes as one, as a team and as friends one to the other.  For at the end of the day, this is a team, not you are a human and they are a horse so you will make them do what you want them to.  Put yourself in their hoofs for a day or a moment, listen to their words, hear them and go from there but at least you have a starting point instead of frustration and punishment.

I’m sure I’m going to be giving this lecture (sorry) for the rest of the show season.  I hope this reaches many ears and a multitude of horses get to speak this year!